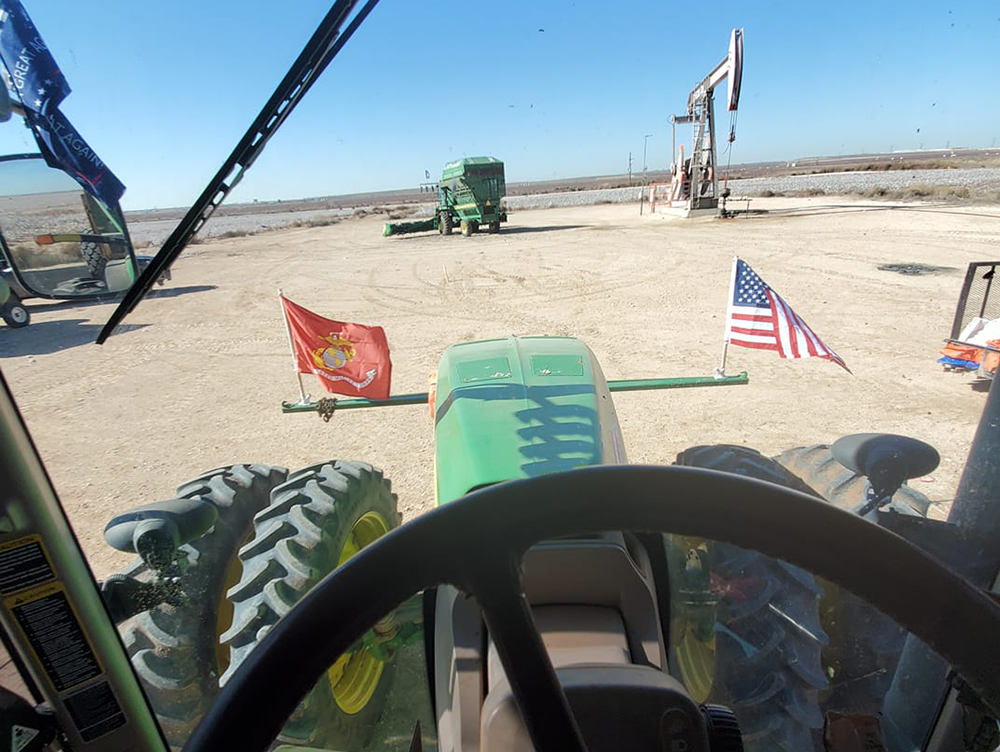 Today, we dedicate Faces of Cotton to the men and women who have served, fought and protected our country. In honor of Veterans Day, we share stories of those who served our country and also serve our cotton industry. 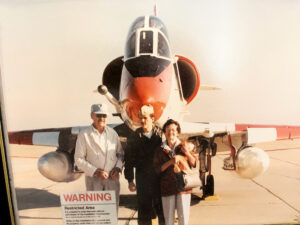 Kirby Lewis with his grandparents after flying into Reece Air Force Base in Lubbock, Texas, on a TA-J4 Skyhawk aircraft.

Kirby Lewis farms cotton in Floyd, Hale and Lubbock Counties. But in a different life, he served as a naval aviator for 6 years, 9 months and 15 days.

“I remember the exact amount, because it was required for my application to Laughlin Air Force Base, where I spent four years with the 96th Flying Training Squadron.”

He joined because he wanted to experience landing on an aircraft carrier. “I didn’t realize I’d have to live on it. An ocean carrier can get crowded with 5,000 airmen and sailors packed in it for a six-month tour.”

After graduating from Texas Tech University with a agricultural engineering degree, Lewis went on to fly E-2C Hawkeyes with Carrier Air Wing 9. “I had 2,100 flying hours by the time I completed two tours on aircraft carriers.”

He went on to fly T-2C Buckeyes as an instructor with Training Wing 3 at NAS Chase Field in Beeville, Texas for another 1,500 flying hours.

He now farms with his son, which he said he wouldn’t trade for the world.

“I think if everyone had military service experience, this country wouldn’t be as divided as it is today. There’s nothing more unifying than serving together as Americans for America.”

“After his service, my dad was a Baptist preacher, and I was a rebel child. I don’t know where I’d be if it weren’t for the Army — you grow up quick in the service.”

West fought in Desert Storm, spending five months stationed in Kuwait. “There are some things you just don’t talk about. Some things I don’t want to think about.”

“I learned honor, trust, work ethic and selflessness during my service. It’s not about you anymore when you’re in the military. I went from a selfish high school kid to a changed adult, which is why I believe everyone should go through basic training right out of high school.” 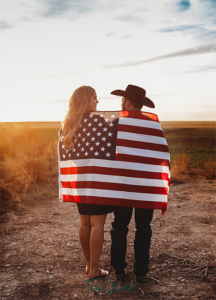 Travis Broiler joined the U.S. Marine Corps right out of high school, motivated in part by 9/11 and in part by his grandfather, who also served as a Marine.

“I don’t think people understand the mental toll it takes on a person to serve in the military.”

Broiler deployed to Iraq for two years as a Marine. When he came back and enrolled in college, he felt lost. “I had trouble finding purpose outside of the service, so I dropped out of college and went back as a contract worker for a security company.”

Another three years in Iraq and Broiler was ready to come back home. Growing up in an agricultural community and heavily involved in FFA, Broiler knew he wanted to farm. He custom farms in the Clarendon, Texas area.

“You grow up quickly in the service. I learned loyalty, commitment, dependability, but above it all, I learned to be on time.”