By Kara BishopSeptember 26, 2022No Comments

Lucas to Introduce ‘Protect Farmers from the SEC Act’ 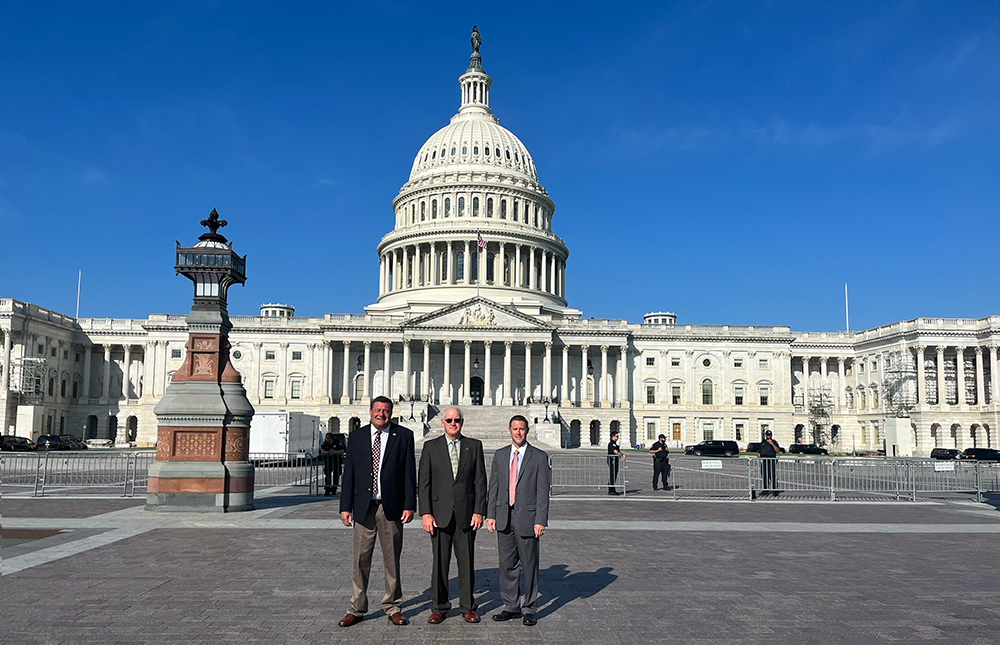 “We have many friends of the cotton industry and agriculture as a whole in Washington, and had some productive conversations concerning our advocacy efforts in regard to end-of-the-year spending opportunities.”

PCG advocated for an extension of the Emergency Relief Program for the 2022 crop year. Nelson and Stoerner were able to highlight the catastrophic crop year for both Senators and Representatives as cotton producers in West Texas.

PCG also highlighted the need to encourage USDA National Agricultural Statistics Service to reinstate the ag level district estimates for cotton. While report language was included in Senate legislation for this, Bessent asked Representatives to consider it, too.

Another important issue PCG discussed with Congress members was the impact of this crop year on the cotton industry’s infrastructure.

“We wanted our government officials to know that cotton gins, warehouses, oil mills, all infrastructure that supports the cotton industry, will also experience negative impacts from the crop conditions of 2022,” Bessent said.

On Friday, the U.S. Environmental Protection Agency (EPA) announced its withdrawal of all remaining portions of the interim registration review decision for glyphosate.

Pesticide products containing glyphosate continue to remain on the market, can be used according to the product label, and are unaffected by this action.

On June 17, 2022, the U.S. Court of Appeals for the Ninth Circuit imposed an Oct.1, 2022 deadline for EPA to issue a new ecological portion of the review decision. EPA sought relief from this deadline, according to their press release, but the court denied it on Aug. 5, 2022.

Therefore, EPA has withdrawn its interim decision, claiming it is unable to finalize a new ecological portion in a registration review decision for glyphosate by the court-imposed deadline.

Last Thursday, Senate Majority Leader Chuck Schumer (D-N.Y.) took the first step toward considering stopgap funding legislation needed by September 30th to avoid a government shutdown. The House is ready to move straight to the bill this week once it comes over from the Senate.

The current plan is for the Senate to vote Tuesday night.

The continuing resolution (CR) would fund the government through mid-December when an omnibus appropriations bill may be approved or another short-term CR will bring us into the new year. The election outcome will likely influence which road Congress takes to conclude the fiscal year 2023 funding process.

Reprinted from the Southwest Council of Agribusiness newsletter.

Lucas to Introduce ‘Protect Farmers from the SEC Act’

Earlier in the spring, the U.S. Securities and Exchange Commission (SEC) introduced the Enhancement and Standardization of Climate-Related Disclosures for Investors.

If adopted, the rule would require registrants to provide certain climate-related information in their registration statements and annual reports — including disclosure of greenhouse gas emissions in audited financial statements. While farmers are not currently “registrants” or subject in any way to the jurisdiction and oversight of the SEC, the proposed rule could change that.

In letters and comments submitted to the SEC, U.S. House Republicans and myriad agricultural groups argued this burdensome legislation would be detrimental to small and mid-sized farms, who lack the resources and means to document all the necessary disclosure information. Additionally, agricultural stakeholders stated the additional cost of time and money would further hinder the ability of farmers to compete in global markets.

Lucas’ proposed bill, “Protect Farmers from the SEC Act,” would prohibit the SEC from requiring disclosure of greenhouse gas emissions from upstream and downstream activities arising from a farm. According to FarmWeek Now, the bill also defines what constitutes a farm, agricultural or horticultural commodities, upstream and downstream activities, and greenhouse gases —and removes the SEC’s exempt authority.

According to Agri-Pulse, “The bill has no chance of passing this year, but it would keep attention on the issue, while signaling that the SEC rule would be a high priority for Republicans if they win control of the House in November.

“Ultimately, the person in the field or the pasture is going to be the goal in this (SEC legislation) and that’s why we can’t have it,” Lucas told Agri-Pulse.

A Farmer’s Story on Mental Health