Emergency loans can be used to meet various recovery needs including the replacement of essential items such as equipment, reorganization of a farming operation, or the refinancing of certain debts. FSA will review the loans based on the extent of the losses, security available and repayment availability.

In the Texas High Plains region, all 42 counties represented by Plains Cotton Growers Inc. are designated as primary disaster areas for drought.

According to the U.S. Drought Monitor, these counties suffered from a drought intensity value during the growing season of D2 (drought-severe), D3 (drought-extreme) or D4 (drought-exceptional) for eight or more consecutive weeks.

Between 1949 and 1957, Texans experienced the second-, third- and eighth-driest single years ever in the state. The 1950s drought was described by a state water official as “the costliest and most devastating drought in 600 years.

Enter 2011. The drought in this year surpassed all years in the 1950s drought as the driest year in Texas ever on record with 14.8 inches of total rainfall.

However, 2021-2022 may be crowned champion of a game no one wants to play. Some counties in Texas haven’t seen rainfall since August 2021. The U.S. Drought Monitor comparisons of current-day conditions and May 2011 prove producers are in the midst of worsening drought conditions this crop year.

Ironically, at the same time, cotton market prices are hitting record highs. “I think every farmer wants to make a crop this year,” said Quentin Shieldknight, producer in Hansford County. “It’s just a matter of faith and help from Mother Nature at this point. Things can always turn around. They have before.”

Rod Snyder, Environmental Protection Agency agricultural advisor, updated the ACP on the EPA’s new Endangered Species Act Workplan to address the legal challenges to pesticide registrations that have been prevalent in federal courts. Regarding dicamba, Snyder stated there are no plans by EPA to change the dicamba label for the 2022 crop year. However, EPA is working closely with the registrants to make possible amendments to the label for 2023.

Darryl Earnest, deputy administrator of the U.S. Department of Agriculture Agricultural Marketing Service, provided an overview of the labor 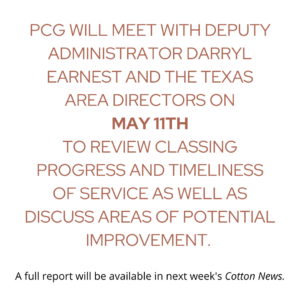 challenges faced by the classing offices in 2021, which caused significant delay in the grade turnaround to gins and producers. Similar issues are expected in 2022 due to significant labor shortages, increasing wage rates, COVID-19 protocols and supply chain issues. The NCC has requested $4 million in fiscal year 2023 appropriation that would assist in increasing automation at the classing offices to assist with long-term labor challenges. Earnest also announced a $0.20 (from $2.30 to $2.50) increase in the cotton classing fee.

Leon Sequeira, former Assistant Secretary of Labor in the George W. Bush Administration, brief ACP on current issues within the H-2A program and the bureaucratic constraints that hamper H-2A’s effectiveness. He also provided a short and long-term outlook of possible immigration reforms proposed in Congress as well as an update on the Farm Workforce Modernization Act.

House Bill 2559 would establish the Kansas Cotton Boll Weevil Program. While boll weevils are not in Kansas, lawmakers wish to create a prevention program for these insects since the boll weevil remains a threat to emerge from a stronghold on Texas’ southern border with Mexico, according to Tim Carpenter with the Kansas Reflector.

The bill would allow the boll weevil program’s board of directors to establish a cotton pest monitoring plan, including the authority to enter private property to inspect fields. If boll weevils or other pests are discovered, the board could develop an eradication plan. The bill would allow the board to levy an assessment on cotton bales, paid by the grower at the time of deposit at the cotton gin, to fund the program.

The COVID-19 pandemic dramatically reduced the demand for these types of clothing, textiles and threads and, in turn, the market for the raw commodities. CAWA will assist in the development and restoration of the market for domestically produced cotton and wool products and ultimately for the underlying commodities.

To be eligible for CAWA, an applicant must have experienced a decrease of at least 15% in calendar year 2020 gross sales or consumption of eligible products described in this document compared to the applicant’s gross sales or consumption in any selected calendar years 2017, 2018 or 2019. Payments to eligible entities will be based on their pre-pandemic market share relative to other similar applicants subject to payment limitations.

The eligibility requirements, payment calculation and application procedure for CAWA can be found here: bit.ly/37pqtE2.