By Kara BishopNovember 11, 2022No Comments 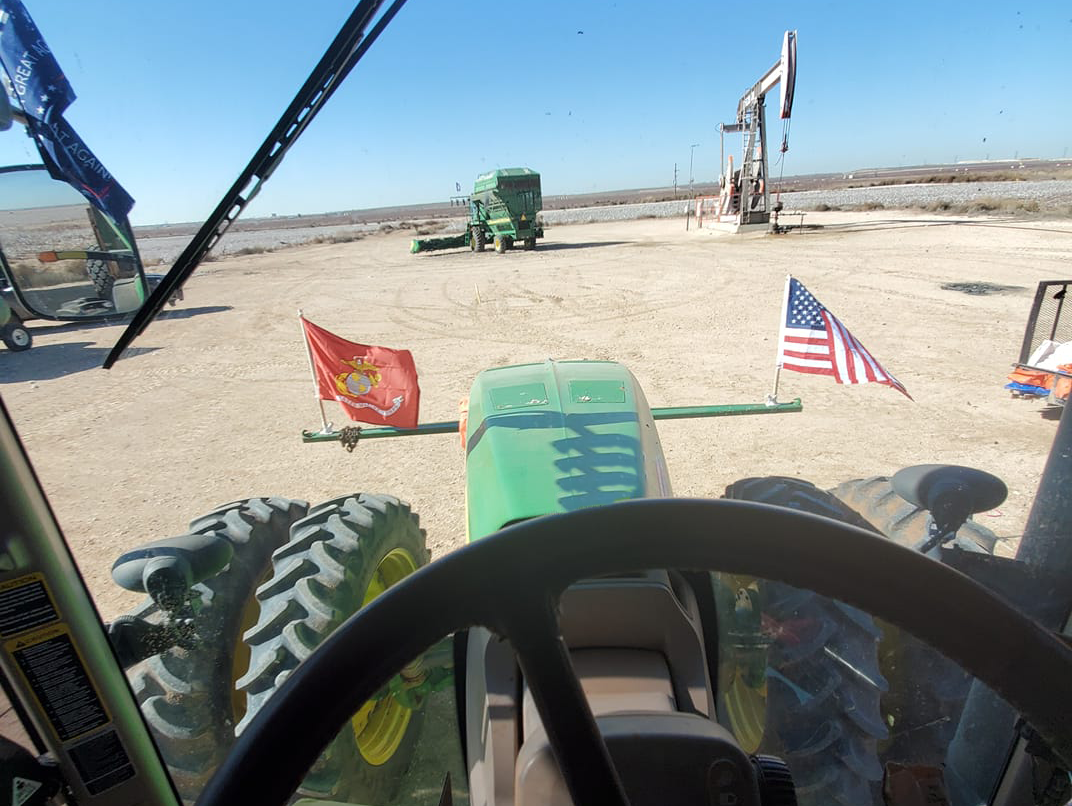 Today, we dedicate our Cotton News newsletter to the men and women who have served, fought and protected our country. In honor of Veterans Day, we share stories of those who served our country and also serve our cotton industry. 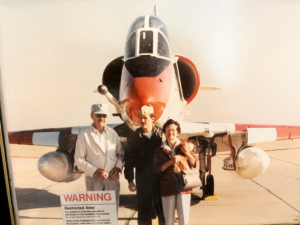 Kirby Lewis with his grandparents after flying into Reece Air Force Base in Lubbock, Texas, on a TA-J4 Skyhawk aircraft.

Kirby Lewis farms cotton in Floyd, Hale and Lubbock Counties. But in a different life, he served as a naval aviator for 6 years, 9 months and 15 days.

“I remember the exact amount, because it was required for my application to Laughlin Air Force Base, where I spent four years with the 96th Flying Training Squadron.”

He joined because he wanted to experience landing on an aircraft carrier. “I didn’t realize I’d have to live on it. An ocean carrier can get crowded with 5,000 airmen and sailors packed in it for a six-month tour.”

After graduating from Texas Tech University with an agricultural engineering degree, Lewis went on to fly E-2C Hawkeyes with Carrier Air Wing 9. “I had 2,100 flying hours by the time I completed two tours on aircraft carriers.”

He went on to fly T-2C Buckeyes as an instructor with Training Wing 3 at NAS Chase Field in Beeville, Texas for another 1,500 flying hours.

He now farms with his son, which he said he wouldn’t trade for the world.

“I think if everyone had military service experience, this country wouldn’t be as divided as it is today. There’s nothing more unifying than serving together as Americans for America.”

“After his service, my dad was a Baptist preacher, and I was a rebel child. I don’t know where I’d be if it weren’t for the Army — you grow up quick in the service.”

West fought in Desert Storm, spending five months stationed in Kuwait. “There are some things you just don’t talk about. Some things I don’t want to think about.”

“I learned honor, trust, work ethic and selflessness during my service. It’s not about you anymore when you’re in the military. I went from a selfish high school kid to a changed adult, which is why I believe everyone should go through basic training right out of high school.” 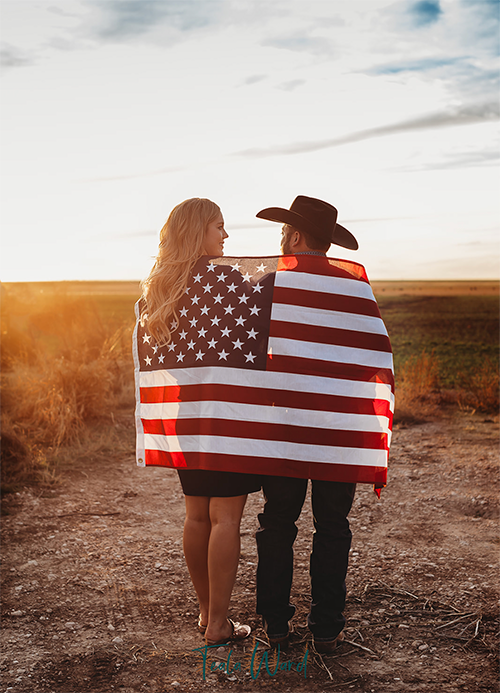 Travis Broiller joined the U.S. Marine Corps right out of high school, motivated in part by 9/11 and in part by his grandfather, who also served as a Marine.

“I don’t think people understand the mental toll it takes on a person to serve in the military.”

Broiller deployed to Iraq for two years as a Marine. When he came back and enrolled in college, he felt lost. “I had trouble finding purpose outside of the service, so I dropped out of college and went back as a contract worker for a security company.”

Another three years in Iraq and Broiller was ready to come back home. Growing up in an agricultural community and heavily involved in FFA, Broiler knew he wanted to farm. He custom farms in the Clarendon, Texas area.

“You grow up quickly in the service. I learned loyalty, commitment, dependability, but above it all, I learned to be on time.”

Thank you to our men and women who serve to fight, defend and protect our great nation.

All 15 cotton-producing states are showing harvest numbers ahead of their respective averages, according to Jim Steadman with Cotton Grower. The biggest jumps in harvest during the past week came in Missouri (up 24 points), Oklahoma (up 16 points) and Kansas (up 15 points). Alabama, Georgia and North Carolina all reported 11-point increases.

The following is a summary of the cotton classed at the Lubbock and Lamesa USDA Cotton Division Cotton Classing Offices for the 2021 production season.

The U.S. House of Representatives has been an elected and eclectic body with its membership reconstituted every two years throughout its history. The biennial term was a compromise at the Federal Constitutional Convention in 1787. The U.S. Senate, following the ratification of the Seventeenth Amendment in 1913, marked the first time since the inception of our democracy that elections were held by popular vote.

Elections are unique, and we are very fortunate and blessed to be able to exercise our right as a citizen to cast a vote toward whom we believe is best fit to serve our interest and needs for our local, regional and state communities and economies.

November 8, 2022, marked the 109th election that has been held by the U.S. to dually elect our representatives in the House and Senate by popular vote — the mid-term, which occurs two years after each presidential election. Elections are held for all 435 seats in the House of Representatives, and traditionally 33 or 34 seats in the Senate are in play. As a result, the membership of these two legislative chambers changes near the midpoint of a president’s four-year term of office.

Historically, the House and, at times, the Senate recreates itself after every election —pending bills expire, committee work is shelved, and new Members take their seats. Even if few new legislators win election and the party in control of the House or Senate remains the same, each session forms its own identity.

While the 2022 midterm elections are not conclusive, a balance of power is presumptively on the horizon. As of press time, according to the Associated Press, House Republicans have secured 211 seats while Democrats have retained 192, leaving 32 seats still yet to be decided. 218 seats are what is needed to serve as the majority in the House. If the balance of power shifts from the current Democratic majority to Republicans in the House, we predict Congressman G.T. Thompson (R-Pa.) will assume the helm of the House Committee on Agriculture and will serve as Chairman during the development of the 2023 Farm Bill.

Likewise, the Senate Republicans have secured a total of 49 seats (29 seats are not up for re-election) while Senate Democrats hold 48 seats (36 seats are not up for re-election). A runoff in the Georgia senate race between Raphael Warnock (D) and Herschel Walker (R) will be held December 6th. If Republicans win the majority in the Senate (still yet to be determined) we expect Sen. John Boozman (R-Ark.) to be the next Chairman of the Senate Committee on Agriculture and would serve in that capacity during the development of the next Farm Bill.

In general, Texas will have seven new Members in the House of Representatives following this election. Neither U.S. Senator John Cornyn or Ted Cruz was up for election this cycle. Statewide elected officials such as Governor Greg Abbott, Lt. Governor Dan Patrick, Attorney General Ken Paxton, Texas Comptroller Glenn Hegar and Commissioner of Agriculture Sid Miller all prevailed in their re-election bid.

We look forward to working with leadership in the next Congress to secure adequate farm policy that helps address issues such as disaster, supply chain challenges, rising input costs, and infrastructure needs.

U.S. Farm Production to Increase in 2023 as Economy Cools