Provided by the U.S. Department of Agriculture – Agricultural Marketing Service

Spot quotations were 134 points higher than the previous week, according to the USDA, Agricultural Marketing Service’s Cotton and Tobacco Program. 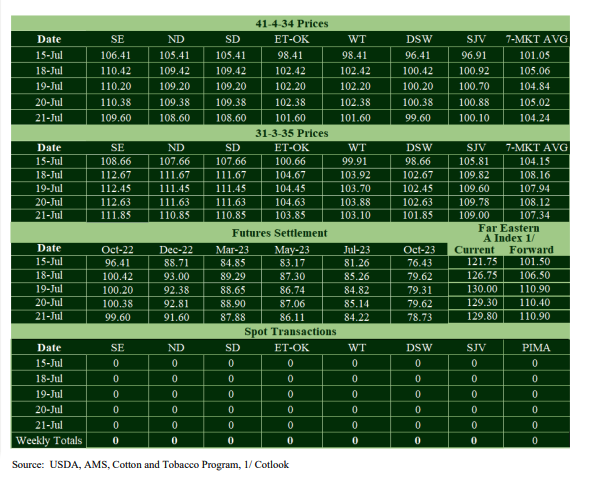 Spot cotton trading was inactive. Supplies and producer offerings were light. Demand was light. Average local spot prices were higher. Producer interest in forward contracting was light. Trading of CCC-loan equities was inactive. Foreign mill inquiries were light. Logistics continued to be negatively impacted by the COVID-19 Pandemic. According to the Centers for Disease Control and Prevention, the weekly community level was high for Lubbock County. The heat wave continued with daytime high temperatures in the low to upper 100s. Abilene and surrounding areas received around one-half inch of rain, but most areas missed any chance at significant precipitation. Triple digit temperatures and parched soils deteriorated stand viability, including some irrigated stands. Most of the dryland acres were failed on the High Plains and the adjusters were making decisions on fields in the Rolling Plains. According to industry reports, some producers took their cotton cover crop, which was wheat, to harvest because of good market prices. Remaining cotton fields are good, but some of the stands are thin. The crop is setting squares and a few fields had begun to bloom. Producers were busy irrigating, fertilizing, and applying plant growth regulators. Lots of fields were plowed.

No trading activity was reported.