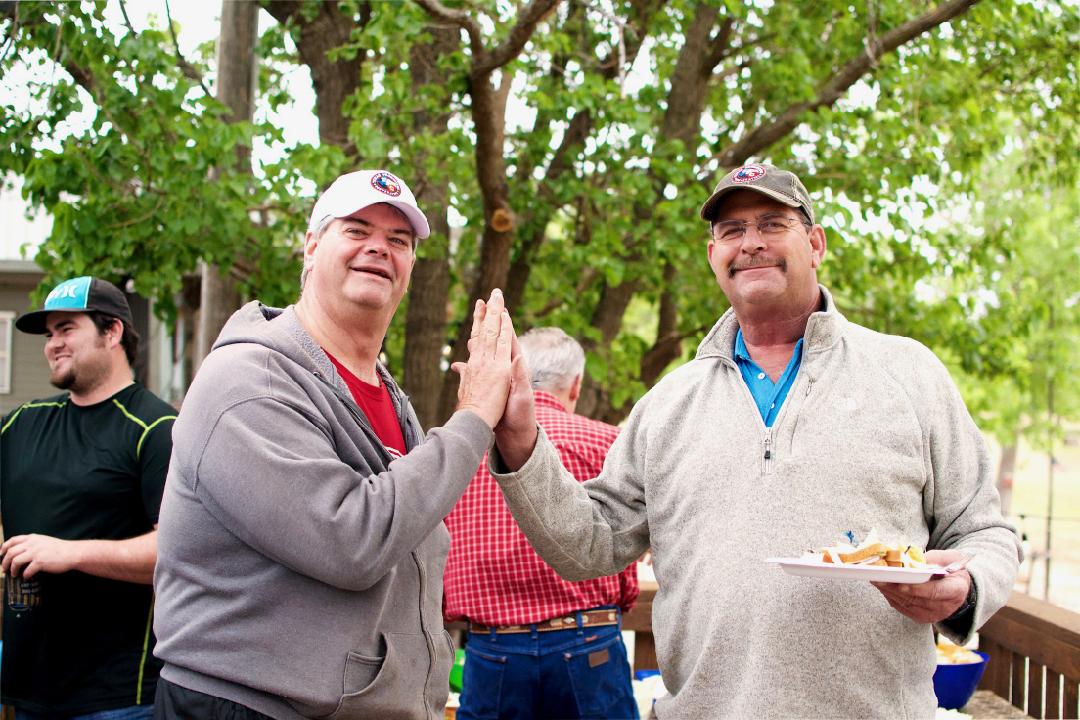 Waiting for his turn to run drills, Guyle Roberson breathed in and out, clenching and unclenching his hands. Jogging in place, staring at the other players also working to change their destiny. This is it, he thought, this is my moment. My chance. They call his name. He steps out on the field.

An hour later, he’s cut from the team.

Reflecting on chasing a football career, Roberson isn’t bitter, which says a lot about his character. An All-American offensive tackle at Lubbock Christian College (now Lubbock Christian University), he suffered a knee injury that hurt his chances of playing professionally. However, he didn’t quit. He worked his way up to playing for the Twin City Cougars, a minor league in California, and a good season there gave him his shot to try out for the Houston Oilers. 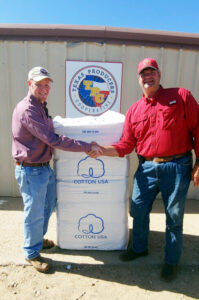 Producer Seth Sowder and Guyle Roberson with the first ginned bale of cotton in 2021.

While he didn’t make a career out of playing football, the discipline and teamwork the sport taught him can be seen throughout his life. The farm boy from Amherst has had quite a ride so far.

Born and raised on a farm in Lamb County, Roberson was no stranger to working.  Farming alongside his father and brother was special. “While I never made a career out of farming,” he said, “I won’t ever forget how working with my family shaped me as a person.”

After football didn’t work out, Roberson worked for Lubbock Power and Light. He spent the next 21 years there working his way to manager of three departments and 45 employees. “Teamwork was crucial in that role,” Roberson said. “And, in a way, I believe it helped prepare me for the one I’m in now at Texas Producers Co-op.”

In 2008, Roberson was approached by Amherst gin board members asking him to run the gin. When he walked in the doors that May, he locked eyes with all his old flag football and little league teammates, including his former little league baseball coach, and knew he had made the right decision. “It felt like a family reunion,” Roberson added. “I had been gone for a while and it was nice to be back home.” 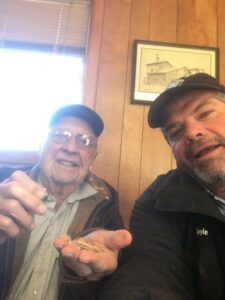 Roberson is a numbers guy. He likes collecting data and measuring trends. He quickly automated the bale count system at the gin and analyzed components that led to inefficiency. Once he had measurements in place, he began prioritizing which concerns were of the greatest importance.

The customers were also part of the analysis process. Roberson assessed where they could provide more value for customers and made strides to improve and maintain product quality both in and out of the gin. “We weren’t just ginning their cotton,” Roberson added. “We wanted to provide more than that.” It worked. The Amherst gin grew by 15% in Roberson’s first year.

In 2016, Roberson was approached about a possible merger between Sudan’s gin and Amherst. He immediately went to his brother, who sat on the board for Amherst to get his opinion. The merger went through that June. 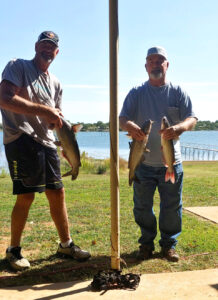 “Mergers are…I guess emotional is the right word for it,” Roberson added. “A lot of emotions when merging two gins into one co-op.”

While the primary function is ginning cotton, the Texas Producers Co-op doesn’t see a lot of downtime in the off-season. As soon as the last bale is ginned, the co-op begins preparing and planning for next year. “That’s when our agronomy season begins,” Roberson adds. “We start looking at seed varieties pretty quickly after ginning.”

Roberson married his wife, Sherri, 31 years ago and has three children. His oldest daughter, Meagan Hunton, is a medical office manager in Amarillo, Texas. Randi Brooke Sheffey is a radiologist in Dimmitt, Texas, and the youngest, Shane Roberson, is a 3D prop artist in Austin, Texas. He also has a six-year-old granddaughter named Zoey. 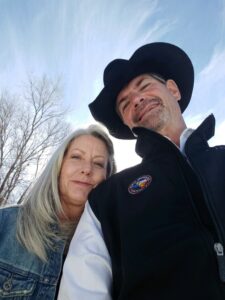 Guyle Roberson and his wife Sherri.

Roberson’s brother, Randy, was always the one he went to for advice. “He was my go-to, my rock,” Roberson said. “His character was unmatched.”

When Sudan and Amherst merged, Randy decided to allow his board position to go up for re-election. “He volunteered to do that for me since I would be the CEO,” Roberson added. “He was afraid it would look bad for me to have my brother as an Amherst representative for the merged co-op. He was selfless like that.”

Randy died suddenly on January 17th — the day after his 58th birthday. Twelve days before losing his brother, Roberson lost his mother.

“My mother lived such a full life, leaving no stone unturned,” Roberson added. “What a blessing to be raised by her. Losing my brother was a total surprise. It’s been rough, but I was so blessed to love and be loved by both of them.” 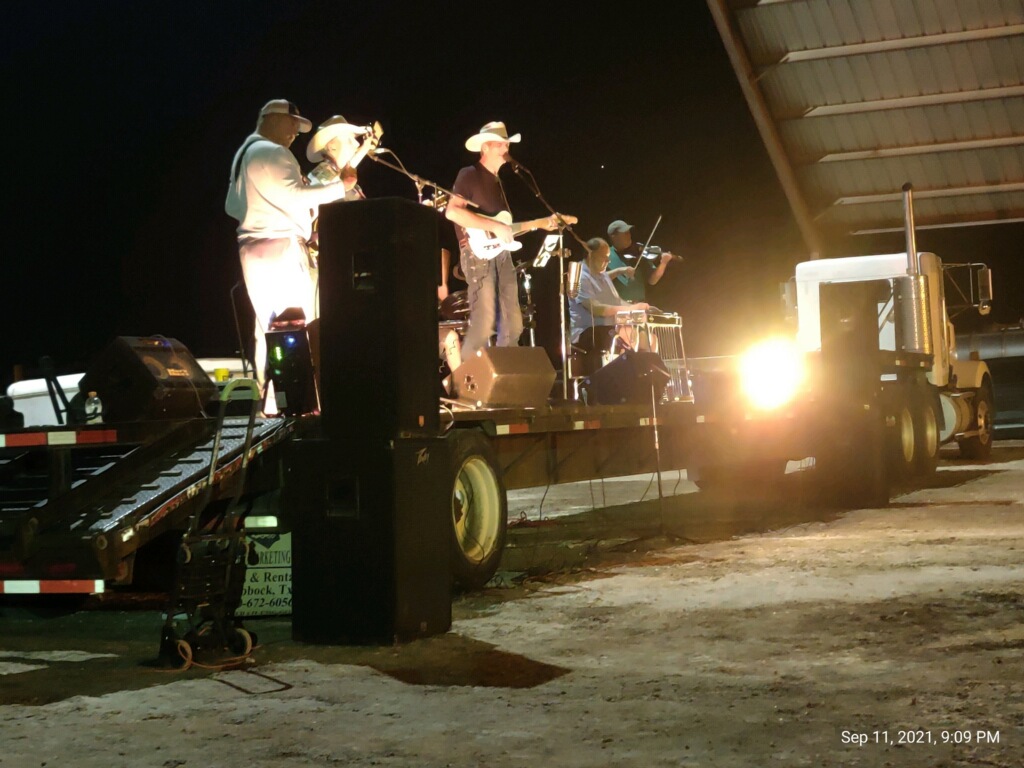 Roberson grew up singing in church and learned to play the guitar. In 1986 he formed a band and played gigs on the weekends. He’s currently the lead singer and guitar player for Guyle Roberson and the Eight-Second Ride. Sometimes, you can catch Mark Brown, PCG director of Field Services, playing the fiddle with the band. 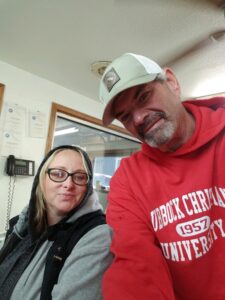 When he’s not singing and picking, he’s studying reports. All the entities of the co-op generate reports that he evaluates and transfers to an excel spreadsheet. “I want to be able to compare our operations to the month before or year before to make sure we’re on the right track,” Roberson added. “There’s always room for improvement and I would hate for us to become complacent, which would lead to loss of growth.”

Roberson manages 40 full-time employees at the co-op and around 100 employees during ginning season. The teamwork spirit ingrained in him from sports is attributed to his success. “We wouldn’t be able to do this if we didn’t all work together,” he added. “Not only work together but work together well.”

Roberson may not have achieved his initial dreams of professional football, but he couldn’t ask for a better destiny than the one he’s been given.