There are people out there that do the work — yet few people know they do it. They are quiet, reserved, happy to do things behind the scenes. They don’t need the glory of other men, nor do they handle it well when it’s given to them. Their big hearts are driven to action and good deeds with less talk.

When they do talk, it doesn’t even occur to them to ensure they get credit for their good deeds, often citing someone else’s impact that achieved the goal.

But sometimes, it’s necessary to bring these people out of the woodwork — to give them the spotlight they’re not always comfortable with. When you experience difficult years, especially this one, it’s nice to know that there is hope for humanity in the stories of wholesome people.

All in the Family

While Wanjura didn’t grow up on a farm, agriculture was a big part of his life growing up. His father, Don Wanjura, served as a research scientist and agricultural engineer for the U.S. Department of Agriculture-Agricultural Research Service (USDA-ARS). His research work in irrigation scheduling helped in the development of drip irrigation systems.

His mother, Sue Wanjura, grew up in a family that farmed cotton around Southland, Texas. Wanjura’s brother, John, followed in their father’s footsteps, and is currently an agricultural engineer for the USDA-ARS.

Wanjura and his wife Christine have been married for 27 years and have three children. But in 2015, three children turned into five overnight.

The Wanjura children attended Christ the King Cathedral School, which operates an international exchange student program. From ninth grade to senior year, two such exchange students, Chen and Eric, lived with the Wanjuras and still visit during the summer and holidays.

“They call us mom and dad — their American parents,” Wanjura added. “While it was hard to raise five kids during that time, it was a great reward for us. Having them and their families as a part of ours has been a great blessing.” 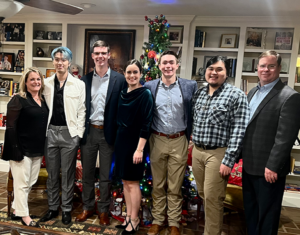 Their second, Ben, is a senior at the United States Air Force Academy in Colorado Springs, Colorado. A few weeks ago, the academy had job drops, where they figure out what their first assignment will be after graduation.

“Ben has wanted to be a pilot ever since he graduated high school,” Wanjura said. “The pilot slots are very competitive, but he got a pilot assignment. We are very excited for him.”

Their youngest, Hugh, is a freshman at Texas A&M University and part of the Corps of Cadets. Chen is also at Texas A&M, while Eric is attending University of California, Davis.

“I’ve thought often about the Chinese one-child policy that China had for years and how these parents send their only children to the U.S. for an education,” Wanjura added. “I’m glad we were able to take care of Chen and Eric like they were our own and give their families peace of mind.”

Prepared for the Role

Wanjura wasn’t looking for a job change while working for PCCA in their gin accounting and field services division, but Ron Harkey, then president and CEO of Farmers Cooperative Compress (FCC) had a plan in mind.

“I got a call out of the blue from Ron saying they were looking for a manager for their Plainview location,” Wanjura said.

As manager of the FCC Plainview plant for 10 years, Wanjura gained experience in warehousing, seeing as he wasn’t familiar with it before then moved back to Lubbock as vice president of Administration — maybe that was the plan all along?

“Looking back, I can see moments, meetings that I was invited to, and even opportunities that I was given by Ron to prepare me to take over his job,” Wanjura added. “To see how well he prepared me to take his role — he didn’t have to do that. And the Board of Directors didn’t have to appoint me, either. The faith that Farmers Cooperative Compress has put in me over the years is humbling.”

According to Wanjura, one of the greatest things Ron Harkey did was succession planning prior to his retirement. He spent years before the event planning for a smooth transfer of leadership that would benefit FCC. “He truly cared about the organization and wanted to leave it better than he had found it,” Wanjura added. “He was a great mentor and still a wonderful friend.”

Harkey’s love of service lives on in Wanjura’s goals as the new CEO and president of FCC, not just because of Harkey’s mentorship, but also stemming from a life of service.

A Heart for People 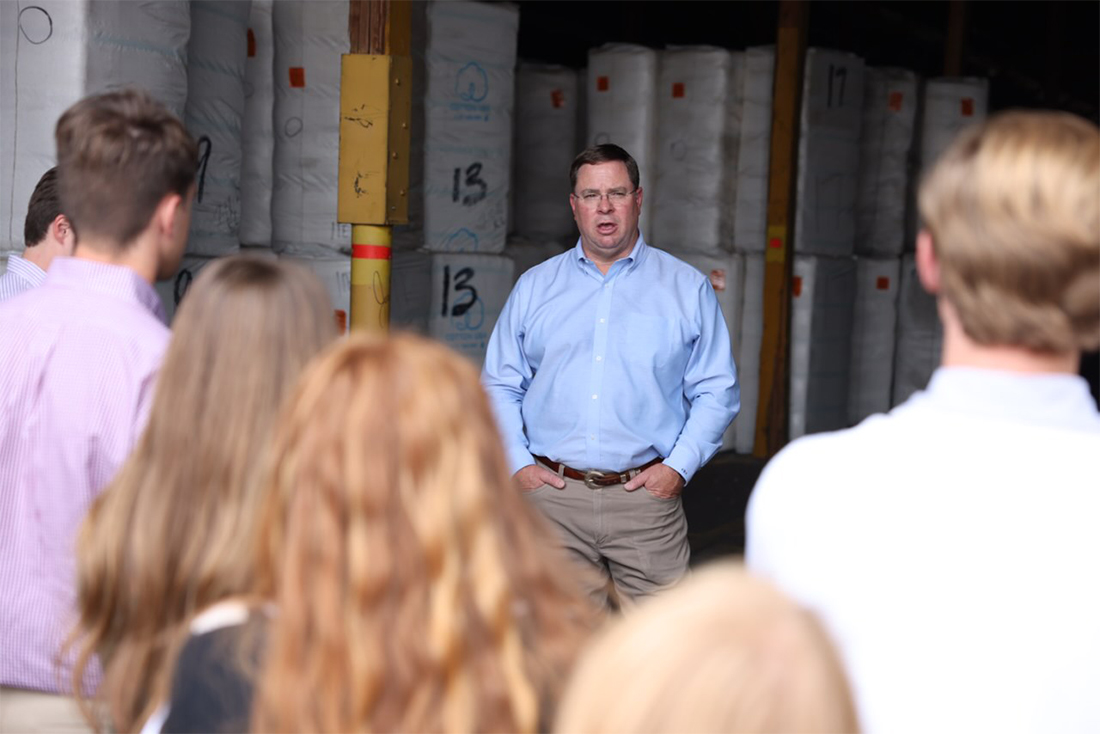 Eric Wanjura hosts the Texas Tech University MILE program at FCC.The MILE Program provides unique leadership and professional development experiences during a three-semester cohort, which is up of 14 selected students that represent each Davis College undergraduate academic department. Students enroll in a MILE course each semester of the cohort and receive a leadership certificate upon completion of the MILE Program.

Suffice it to say, it’s been an eventful two and a half years for FCC’s new president and CEO Eric Wanjura.

During the Plains Cotton Growers Inc. Board of Directors Meeting in July, Wanjura left early with a heavy heart. Due to the catastrophic 2022 crop year, he was having to let some FCC employees go.

Last year, FCC received 2.6 million bales. Their current estimate for this year is 580,000. When you are only receiving 22% of the bales you received the year before, management becomes difficult.

“Unfortunately, we had to lay off about 55 employees, which we hated to do,” Wanjura said. “It’s like losing a part of your family.”

FCC went through a similar situation in 2011 and Wanjura is hoping the outcome will be the same as it was then.

“These employees knew it was coming,” he added. “They watch the news and knew what was going on. When we had to reduce staff in 2011 when the drought was so bad, we were thankfully able to hire them all back the following year. We fully plan and hope for this to happen for the 2023 crop year.”

The FCC relationship with its staff transfers to producers, as well.

“We truly strive to protect and enhance the value of our members’ cotton, not just because we want their business, but because, like our staff, they, too, are our family.”