By Kara BishopNovember 18, 2022No Comments

Letter to the Editor: ‘Mr. Hamburger’

Plains Cotton Growers Inc. is partnering with the High Plains Journal to deliver the PCG Annual Meeting plus Cotton U on March 28, 2023, at the Overton Hotel & Conference Center.

Tyne Morgan, host of U.S. Farm Report, will emcee the meeting. She will also provide an agriculture industry outlook.

“I admire so much about farmers and ranchers in the Texas High Plans, but what I admire most is the grit and tenacity they show each and every year,” Morgan said. “This past year that was on full display, and it’s an honor to join PCG for the annual meeting. We’ll dig into the news and issues that matter most to cotton farmers in the area, but I’ll also share stories from across the country that showcase the best of agriculture and rural America.”

PCG is pleased to announce John Kriesel as the 2023 keynote speaker. If Dr. Norman Vincent Peale was writing his incredibly popular book, “The Power of Positive Thinking,” today he would need to add a separate chapter on Kriesel.

In 2006, Kriesel was nearly blown to shreds by a 200-pound roadside bomb in the parched sands of Iraq. He died three times and was shocked back to life.

He survived four hospitals, 25 surgeries and months of recovery.

He lost both legs and suffered numerous other major injuries, but it was the loss of two close friends that hurt most.

The guy who wasn’t supposed to survive and was told he would be wheelchair bound the rest of his life walked out of Walter Reed Amy Medical Center nine months later. Kriesel reveals his motivational story in “Still Standing: The Story of SSG John Kriesel,” and will bring this story to PCG’s annual meeting next year.

He is the director of Veterans Services for Anoka County and is a former member of the Minnesota House of Representatives. He was elected to the state House in 2010 after a vigorous campaign where he was told he could not possibly win the district. He literally wore out the socket in one of his prosthetic legs visiting thousands of homes during his campaign.

“John Kriesel is a hero for our nation and we look forward to his presentation of resiliency and positivity as we look toward another production year in the cotton industry,” said Martin Stoerner, PCG President.

PCG is offering online registration for the upcoming annual meeting. To register and view the meeting’s agenda, click here.

Letter to the Editor: ‘Mr. Hamburger’

Thank you for the history report that was in the Nov. 11, 2022 issue of Cotton News. I love Texas cotton history. 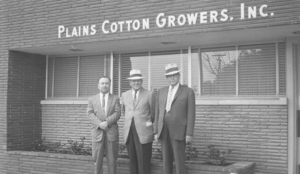 I was born in Lubbock in 1956. That same year, my daddy, H.A. (Bob) Poteet, went to work for the newly organized Plains Cotton Growers as Director of Field Services.

My dad had just graduated from Texas Tech University with a degree in agricultural economics. He later went to work as vice president for the Lubbock Cotton Exchange upon Mr. Pfeiffenberger’s recommendation.

I remember “Mr. Hamburger,” a name that I gave him, well. Until I was ready to go to school, and even in Kindergarten, I went to the office with dad.

I remember Mr. Hamburger even picking me up from school and taking me for a hamburger!

I remember sample room days where he taught me to run the cotton fibers through my fingers to determine the staple. He was a very stern man and cotton was a very serious business to him. Saturday was just like Friday is today. Every cotton man worked on Saturday!

Thank you for the sweet memory!

“Some states have begun to regulate pesticides in a manner contradicting decades of scientific guidance from the Environmental Protection Agency,” the letter stated.