By Kara BishopNovember 3, 2022No Comments

Who Was George W. Pfeiffenberger? 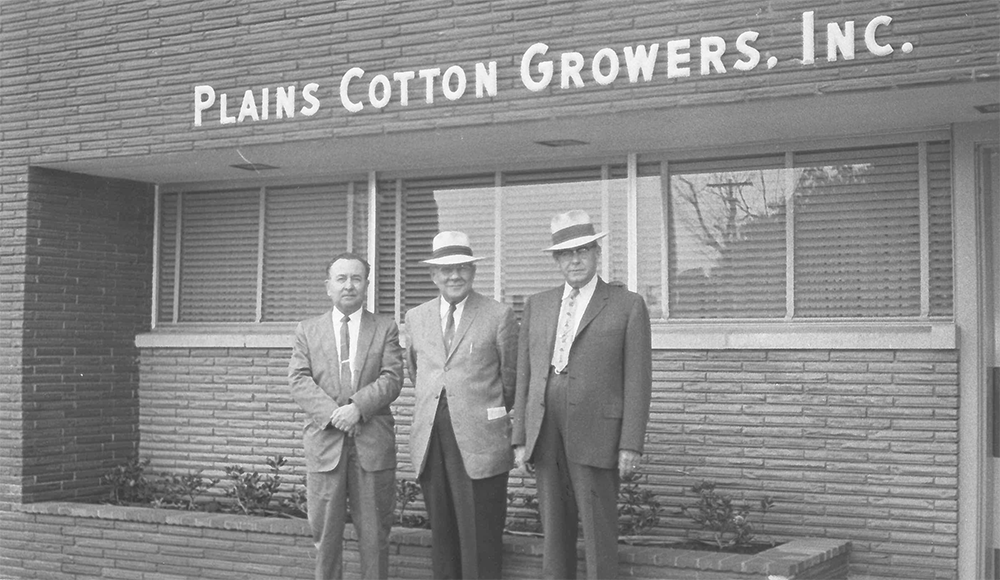 Who Was George W. Pfeiffenberger? 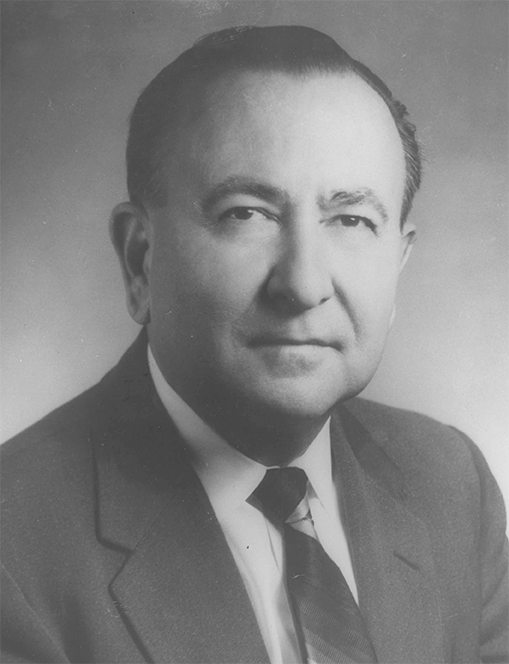 While working on a historical timeline for Plains Cotton Growers, I’ve been transported back to another time where they wore suits and ties in cotton fields and paved the way for cotton in the Texas High Plains.

I’ve found some true gems along the way, including the vote to establish Plains Cotton Growers Inc. where the minutes state: “The decision was so unanimous that a negative vote was not requested.” These people wanted better for cotton in this area. But none more so than the man I’m going to talk about today.

While elbows deep in boxes of newspaper clippings, meeting minutes and black-and-white photographs, I pieced together the story of PCG’s first executive vice president: Mr. George W. Pfeiffenberger. It wasn’t that hard to do. He took copious notes and even wrote a brief autobiography.

Pfeiffenberger wasn’t a native of Texas. He was born and raised in Dayton, Ohio, but his coursework in textiles at Texas A&M, combined with his knowledge in fiber quality, made him an attractive candidate to head PCG. He began his cotton career in 1930 with the U.S. Department of Agriculture (USDA) Cotton Division, and was one of the first technologists in the newly formed cotton fiber laboratory in Washington D.C.

“This was the beginning in the U.S. of the first real program of cotton fiber research on a scientific basis,” Pfeiffenberger writes.

During the 15 years he spent with USDA, he learned the basic structure of fibers and the measurements of their chemical and physical properties, while also collaborating in developing new methods and instruments for fiber measurement and research.

I started to get a feel for a very serious man who meant business. And, while I know he did take his career seriously, he had another interesting pastime. Pfeiffenberger was a cartoonist.

He completed a correspondence course in cartooning and eventually became a freelance cartoonist for the sports section of the Dayton Morning Journal while attending college in Ohio. (I’ve been searching for an original sketch — so far, no luck.) Later in life, he would even provide editorial cartoons on cotton to industry publications.

In 1945, he moved to Lubbock where he assumed the role of Cotton Research Director for the Chicopee Manufacturing Corporation (a subsidiary of Johnson & Johnson).

Another reason he was a shoo-in for the PCG job was his experience in all facets of cotton. 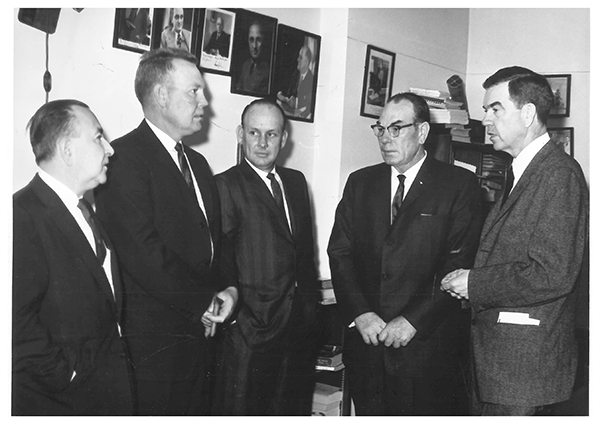 I’d like to think that his work in the industry is partially responsible for the 25% to 35% U.S. production currently attributed to the High Plains.

Pfeiffenberger had many accolades, including: “Man of the Year” by Cotton Digest Magazine, and an Honorary Doctorate from Texas Technological College (now Texas Tech University).

“George was the hardest working man I had ever met,” said Don Johnson, who served as George’s executive assistant from 1960 to 1964 before assuming the role of PCG executive vice president. “He dedicated his life to Plains cotton.” 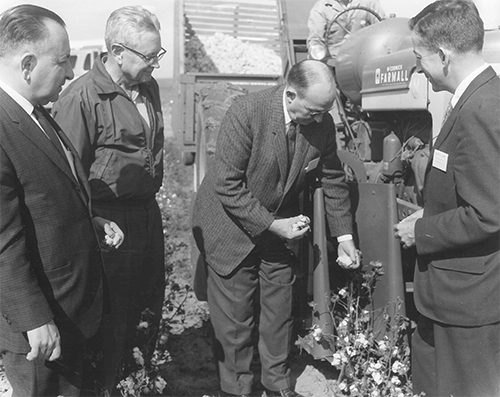 In 1964, Johnson randomly decided to go down to the office on a Saturday when PCG was normally closed. He walked through the door to find Pfeiffenberger (who often worked on weekends) clinging to his desk. He suffered a heart attack and passed away suddenly at the age of 56.

His legacy and life’s work were dedicated to the establishment of Plains Cotton Growers and the enhancement of Plains cotton’s global reputation. Pfeiffenberger initiated our core mission to provide premier service to cotton producers and the cotton industry in all things related to legislation, research, promotion, and service for the High Plains. The impact of his efforts were felt throughout the state of Texas, so much so that State Senate resolution No. 184 by then Sen. H.J. “Doc” Blanchard was written Feb. 25, 1965, which states:

“Resolved: That the Senate of the State of Texas by this Resolution recognizes the great loss to this state by the death of George W. Pfeiffenberger, and extends its sincere sympathy to the members of his family; and be it further that copies of this Resolution be prepared for his wife and two children, and that when the Senate adjourns this day, it do so in memory of George W. Pfeiffenberger.” 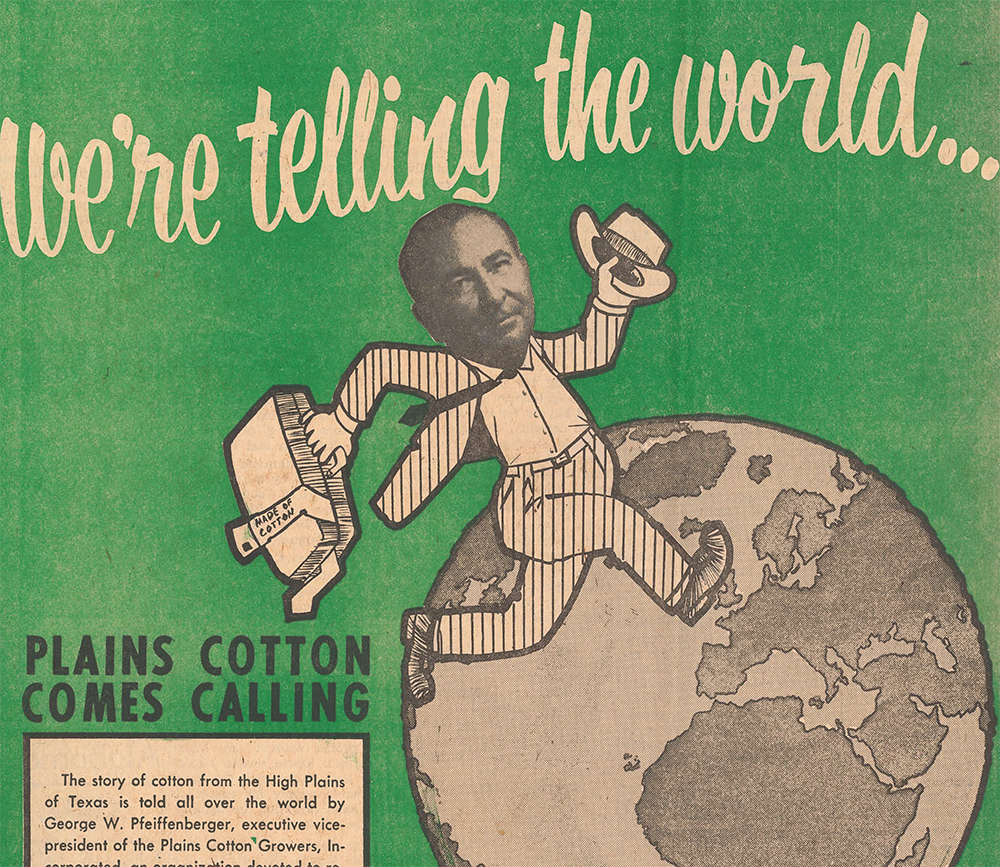 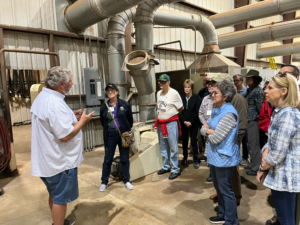 Plains Cotton Growers Inc. had the privilege of hosting the Texas Tech University Osher Lifelong Learning Institute (OLLI) for their course, “Cotton: From Field to Fabric.”

OLLI is a unique educational program for adults over 50 years of age who wish to learn about different industries and techniques.

“I have been in the cattle industry my entire life here in Lubbock and had no idea how advanced and technical aspects of the cotton industry can be,” on student commented.

Another added, “We are going to dazzle our friends from East Texas the next time they visit with all of our new knowledge on cotton.”

It’s exciting to educate our communities on this industry, knowing that education produces more advocates for the way of life we love so much.

A Pretty Flat Outlook for Farm Exports in 2023