By Kara BishopSeptember 30, 2022No Comments

Earlier in the week, as the hurricane moved off the coast of Cuba, many cotton farmers in the Southeast began scrambling to save their acres, according to Steve Crump with WBTV. Farmers in South Carolina were racing against the clock to harvest before the potential impacts of the storm headed their way.

David Parrish, chief executive officer of NC Cotton Producers Association in Nashville, North Carolina, said the storm is on track to move through South Carolina, then head West, avoiding most of his state.

“If Ian had hit the east coast, we would have been in serious trouble,” Parrish added. “Most of our cotton is in the northeast portion of the state, so while there may be some pockets affected more heavily than others, we may only experience rain events here.”

“It’s better than it could have been, but we still hate to lose anything production-wise this year. With input costs the way they are combined with a hotter crop year than we’re used to, whatever we lose is going to hurt. However, the damage is not expected to be as bad as we anticipated a few days ago, so we’re grateful for that.”

“I was really concerned about the storm a week ago and on Monday I participated in three interviews discussing potential damages to Georgia’s cotton,” Sills said. “However, the storm has shifted so much in the past three days, that it’s only going to effect a small pocket of producers in the east of the state. Most of them will only deal with two to four inches of rain now rather than the initially anticipated hurricane force winds and 15+ inches of rain. The area that was supposed to get the worst of it might not even get rain now.”

After Hurricane Ian hit Fort Meyers, Florida, it went up through Jacksonville downgraded to a Tropical Storm. Then it went back out into the ocean. It’s now upgraded to a Category 2 Hurricane scheduled to hit Charleston, South Carolina at noon today.

“This will be the third time this storm hits land mass,” said Dave Ruppenicker, chief executive officer for Southern Cotton Growers, Inc., which represents Alabama, Florida, Georgia, North Carolina, South Carolina and Virginia. “Hurricanes don’t typically operate this way — even the way the storm came in hitting the west coast of Florida was atypical,” he added.

According to Ruppenicker, Florida cotton was spared for the most part, since it’s primarily grown in the western part of the Florida panhandle.

“In South Carolina and Virginia, cotton becomes more vulnerable sometimes because farmers try to get their peanuts out first so cotton stays in fields longer,” Ruppenicker said.

The Southeast hasn’t seen as many storms or hurricanes as originally anticipated but Ruppenicker says Ian more than makes up for it, even though cotton specifically isn’t taking on as much damage as other industry segments.

“It’s an act of God,” Ruppenicker added. “There’s nothing you can do about it but hope and pray that somehow you pull out of it and move on to live another day.”

Yesterday, Cotton Incorporated announced the 2022 class of the Cotton Research and Promotion Hall of Fame. 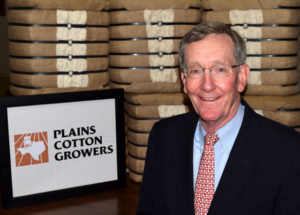 Verett has held many leadership positions in the cotton industry including integral roles in the development of agricultural policy. He helped develop farm bills and facilitate successful farm policies and research provisions, which also included returning cotton as a covered commodity under the 2014 Farm Bill legislation.

The House passed a short-term government funding patch on Friday — previously passed by the Senate with a 72-25 vote — effectively sending the measure to President Biden hours before a shutdown would’ve kicked in at midnight.

The lower chamber cleared the measure in a 230-201 vote, funding the government through the midterm elections until December 16th.

The temporary funding package buys time for congressional negotiations on a broader government spending deal to take place toward the end of the calendar year.

Famers Race Against the Clock to Beat Ian