The top Republican on the House Agriculture Committee is making clear he wants nothing to do with some proposals by fellow conservatives to slash farm bill programs.

“I don’t appreciate it, I think it’s bad messaging,” Representative GT Thompson (R-PA) said yesterday at the Farm Program Show in Boone, Iowa. “If any of those policies would be implemented by any administration in either party, it would crush rural America.”

A proposed budget released by members of the Republican Study Committee (RSC) calls for eliminating the farm bill’s “duplicative” Price Loss Coverage and Agriculture Risk Coverage programs to save $42.7 billion over 10 years. The plan also proposes cutting crop insurance premiums in half and eliminating the federal reimbursement to crop insurance companies for administrative expenses.

Thompson, who will likely become chairman of House Ag if Republicans win control of the chamber in November, said he plans to begin hearings on a new farm bill early in the new year. He did not give a timeline for acting on the bill, but he said he wants funding allocations from the House Budget Committee by June or July.

The article above was reprinted with permission from Agri-Pulse. For more information go to www.Agri-Pulse.com

Sen. Ted Cruz (R-Texas) came to the FiberMax Center for Discovery in Lubbock on August 30th to participate in an agricultural roundtable discussion with commodity groups in the area.

“It’s good to be with you,” Cruz said in his opening remarks. “I know this has been a tough time in West Texas. This drought is hurting farmers across the state. I know crop yields are down significantly and people are hurting. I appreciate the resilience of farmers and ranchers.”

Cruz added that discussions about the upcoming Farm Bill would gain momentum after November elections. He went on to say his team will aggressively advocate for farmers in Texas — making sure the items in the Farm Bill reflect the needs in this state.

Questions came from around the room as industry reps highlighted the need for Farm Bill baseline funding, 2022 disaster assistance, an overhaul of the H-2A Visa Program for Temporary Workers and overall labor challenges.

“I think November is going to be a very good election that gives us the majority in the House and possibly the Senate,” Cruz responded. “I am on the road campaigning for both House and Senate and will do a bus tour for the entire month of October visiting in contested Congressional races across the country to help flip Congress. I’m doing this because the policies coming out of Washington D.C. are devastating to the state of Texas. All of these issues we’ve discussed today are huge issues and flipping Congress would definitely be in Texas’ favor.” 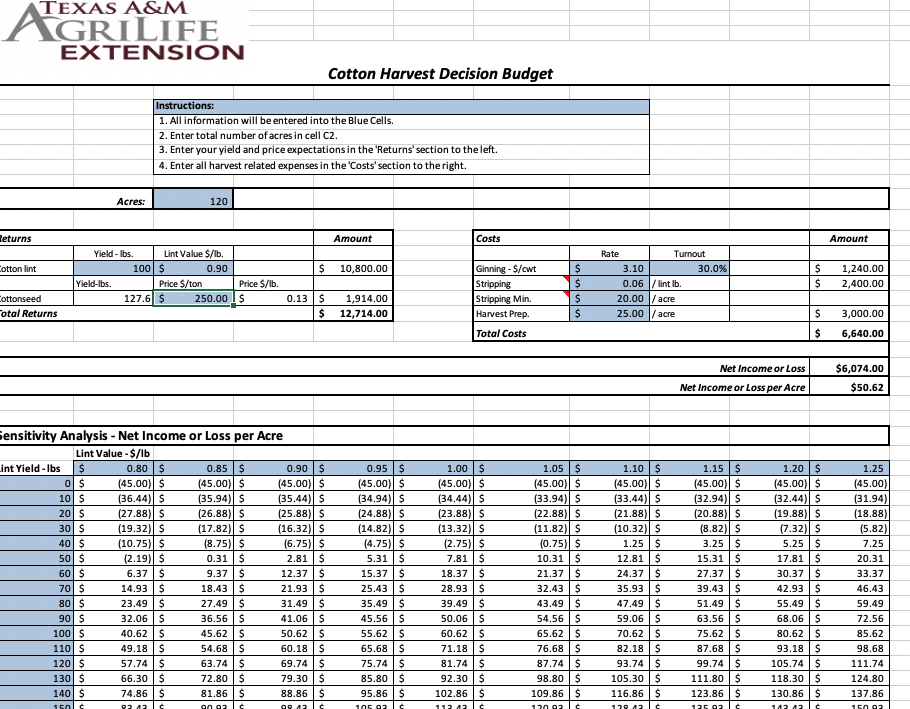 The U.S. Department of Agriculture (USDA) Agricultural Marketing Service (AMS) invites cotton industry stakeholders, trade associations and all who are interested to attend the official grand opening of the new Lubbock Cotton Classification Complex in Lubbock, Texas, on Wednesday, September 14th at 10 a.m.

At an early tour given to Plains Cotton Growers Inc. in May, Earnest said everything in the new facility was designed with conservation in mind. Recyclable materials were used throughout the building and a one-of-a-kind HVAC system was engineered and installed to optimize the building’s energy efficiency.

Many of the systems in the 30,000-square-foot facility are fully automated, making the complex the most advanced classing facility in the U.S.

“I got a sneak peek, and it is an impressive facility,” National Cotton Council CEO/President Gary Adams told Farm Press. “It is a real testament to USDA in terms of the cotton program, how they’re working to be as efficient as possible — and as timely as possible in classing the crop through new technology.”

According to Farm Press, Earnest added that USDA’s 10 labs, located across the Cotton Belt, classed 17.1 million cotton samples in 2021. Lubbock’s previous lab classed 3.4 million samples. The new facility, located on the Texas Tech University campus, is equipped to process 50,000 to 60,000 samples per day. Earnest says he hopes to class more, and “make it perform at the level that we designed it for.”

“We’re excited to show everyone this new facility in Lubbock,” Earnest added. “This area serves as the largest concentrated region of cotton production in the U.S., which is a vital part of the cotton industry in general, but also a key source of annually exported cotton. The cotton from the High Plains is highly sought after from many importers in other countries and we are excited to begin classing it in the new facility this season.”

The U.S. Department of Agriculture (USDA) Foreign Agricultural Service (FAS) attempted to launch a new export sales reporting and maintenance system on Aug. 25, 2022; however, the system was taken offline due to unforeseen challenges affecting the physical dissemination and quality of the data.

To answer questions regarding the system’s shortcomings and the future of data distribution, USDA-FAS administrator Daniel Whitley stated Wednesday that FAS would be reverting temporarily to the old system while working to resolve issues with the new system.

He went on to say that FAS would not publish weekly export sales yesterday or next Thursday, September 8th. Regular reporting will resume September 15th.