Welcome to the February 3, 2023 issue of “Cotton News,” a service provided by Plains Cotton Growers Inc. for the cotton industry in the Texas High Plains and beyond.

Now that the 2022 cotton crop is off the stalk, producers shift focus to markets and decisions for next year. 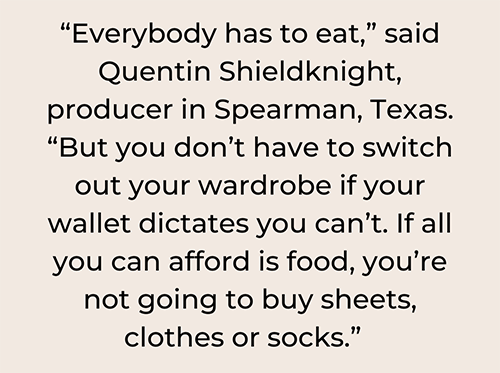 “We finished ginning a few days before Christmas, and normally this far out from ginning, we would have most of the cotton sold,” said Jordy Rowland, manager of North Gin in Dimmitt, Texas. “I’m still sitting on quite a bit of cotton. Most of it is on call with the basis locked in, but it’s hard for my guys to pull the trigger on 85 cents when prices were much higher at the beginning of the season.”

He’s not the only one.

“We ginned 66,000 bales and 32,000 bales are contracted,” said Alexa Reed, office/marketing manager for Moore County Gin in Dumas, Texas. “Some producers are still waiting on a better price.”

Mike Canale, merchandising manager for PCCA, believes that there may be more cotton out there unpriced than expected given the size of the 2022 crop.

Trying to make a profit, combined with volatile markets, supply and demand dysfunction, and a year of unfortunate weather can be a tough game for anyone to play.

“Sometimes landowners can play a role in the process,” said Martin Stoerner, producer in Lockney, Texas, and PCG president. “We had one landlord that wanted us to sell early so we did. Not because they want the money — they just like to keep their income in the same calendar year for tax purposes.”

Lenders can spur sales decisions, as well, which is why purchasing call options are popular.

“I just came back from the Carolinas and they are selling at 87 and 88 cents over there,” said Lou Barbera, cotton trader for VLM Commodities. “They were saying, ‘No, we’re not going to get what we wanted but the basis is still better than the last couple of years at this time.’ And they didn’t want to dip into an 8.5% operating loan — that was the main factor.”

“Everybody has to eat,” said Quentin Shieldknight, producer in Spearman, Texas. “But you don’t have to switch out your wardrobe if your wallet dictates you can’t. If all you can afford is food, you’re not going to buy sheets, clothes or socks.”

Merchants have discussed in multiple Plains Cotton Advisory Group meetings this year that the market is looking for the demand — it just hasn’t been there.

This may be changing, though, based on the USDA Foreign Agricultural Service US. Export Sales Report released Jan. 26, 2023.

The report states 199,600 bales were sold with 28,500 cancellations netting 171,100 bales. “If we have roughly 150,000 bales sold or higher on a weekly report, we feel pretty good about where the demand is headed,” said Joshua Burris, southwest cotton manager for COFCO International.

However, China and Turkey were the largest buyers this week. While that is encouraging, according to Barbera, it isn’t surprising.

“China buys around this time every single year,” he added. “They buy in the first two months of the year, and they buy again in May and of course as needed during the rest of the year.”

A chart from Lou Barbera indicating China’s cotton purchase schedule every year. Click on the image to download.

A true rise in demand will need a more consistent demand stream.

“The USDA has the most pessimistic view on demand and the most optimistic view of supply, which isn’t helping,” Barbera continued. “And we can’t forget the ‘perfect storm’ the textile mills have gone through. They were forced into a position starting in 2021 where they were told not to buy because the spreads were heavily inverted meaning prices were overinflated. That was at 88 cents by the way. Prices were then fixed around $1.40 and they were forced to buy, so now they’re holding out.”

There are multiple options for selling cotton, which comes with multiple decisions.

Are producers going to choose to enter a seasonal pool at the beginning of the season that’s acreage based to eliminate weather-related production risks?

“Back in May, I was struggling with motivation to plant, because the prices were so great and the drought bad and expected to worsen,” Shieldknight said. “Weather can be one of the most frustrating parts of this whole deal.”

Are they going to commit to on-call agreements, purchase call options on the assumption the market will rally, or purchase put options assuming the market won’t?

“On-Call agreements have been popular this year with our producers,” Canale added. “If the market rallies it can increase your profit.  The producer can receive loan value up front and once invoiced the warehouse storage deduction stops as well.”

Are they going to hold cotton and do nothing, hoping loan interest rates and storage fees don’t eat into whatever profit comes from the price they agree to?

“Basically, you’re running on borrowed money with high interest and if you add storage fees on top of that, it’s hard to hold out for long,” said Bryan Baker, producer in Sudan, Texas. “And buyers know that, too, so they hold out. We’re all bluffing until someone folds.”

As prices and input costs currently stand, there are some producers who will largely minimize their cotton acres for this coming season.

“Up here we have more options,” Shieldknight added. “We’re going to increase our corn, milo and soybean acres to put us in a better position and decrease the risk. With loan interest rates double what they were, grains are just a better option for us.”

“They are similar to cotton in that they don’t need much water,” he added. “And prices for peas are better than cotton right now with less input cost. Prices for black-eyed peas are set at 65 cents per pound, so 1,000 pounds gives you $650 an acre. I’m still a cotton man though, don’t get me wrong.”

The consensus from sources is that producers would let their unsold 2022 cotton go for 90 cents to $1. 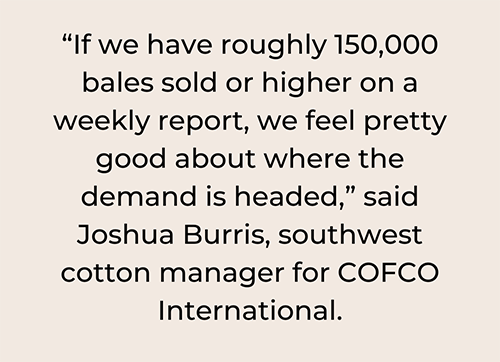 “We would pull the trigger for $1,” Stoerner said.

“I did the math on what my operation needs to break even and it’s 85 cents,” Baker added. “I’d rather make a profit, so I’m hoping to see 90 cents before I have to make a decision.”

“Producers are holding on because the market sits at a break-even price,” said Guyle Roberson, manager of Texas Producers Cooperative Association. “They’re holding on and rolling the dice because they need a profit.  Normally you can sell cotton at 85 cents and be happy with that, but input costs this year change what used to be considered normal.”

“I believe if we saw 90 cents, most of our producers would sell,” said Reed and Jerrell Key, manager of Adobe Walls Gin in Spearman, Texas.

“There’s got to be a rally here somewhere,” Shieldknight added. “We’re going to break through 90 cents eventually. It’s been challenging because it gets up to 89 then falls back to 85 the next day. It’s fascinating to me that we’re not already at 90 cents after the disaster that Texas went through in 2022. We get to 90 and I think everyone will start selling like crazy.”

Baker also noted that the market could go back up once the USDA Risk Management Agency sets the 2023 projected insurance price at the end of this month.

Regardless of the strategy used when marketing and selling cotton, producers in the Texas High Plains play to win, even if they come up short. 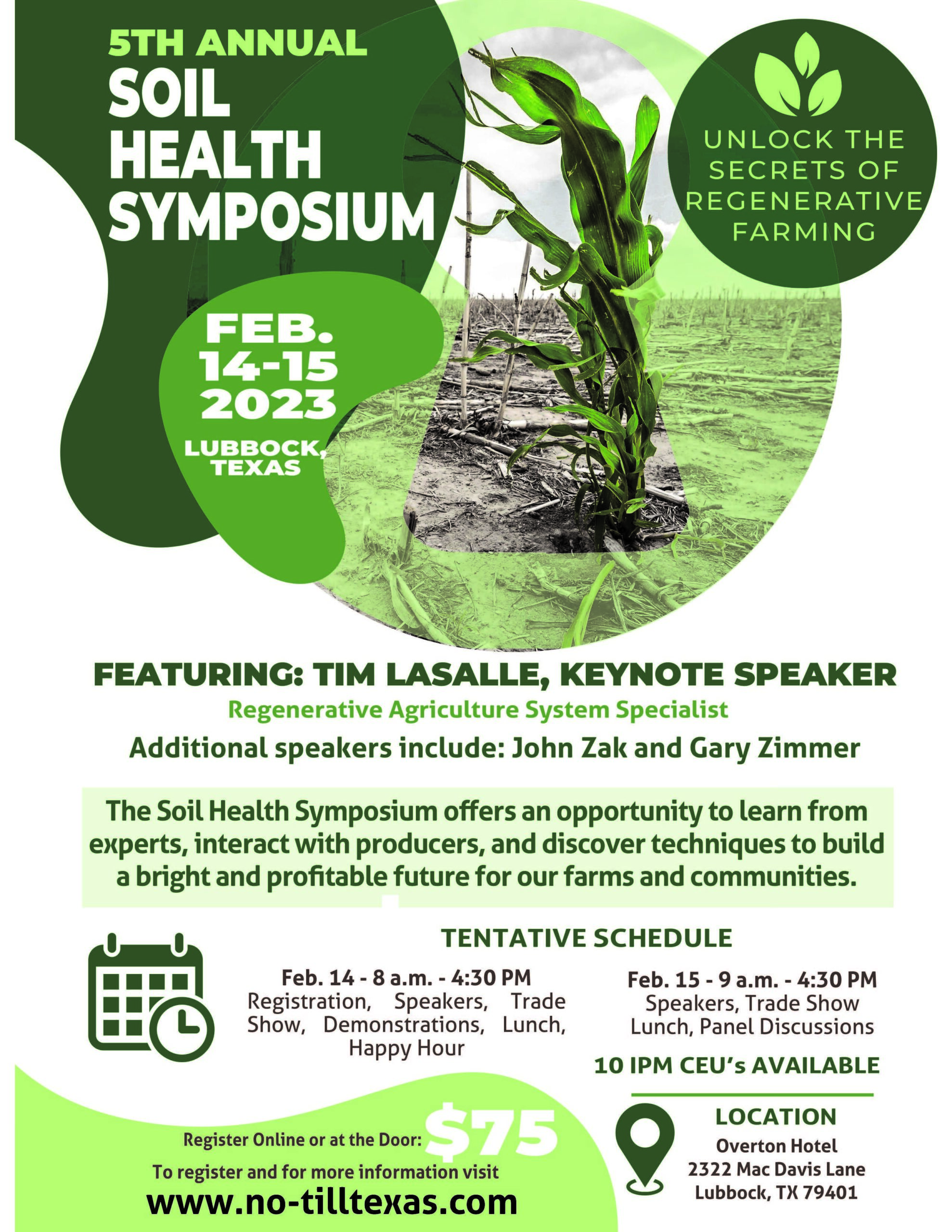 The Plains Cotton Growers Inc. 66th Annual Meeting will be held on March 28, 2023, at the Overton Hotel and Conference Center in Lubbock, Texas.

This year, online registration is available and highly encouraged.

We are excited for this year’s event! Pre-Registration is highly encouraged.

The Emergency Relief Program (ERP) Phase 2 Calculator is now available. This tool can help you determine eligibility for Phase 2 and provide an estimated program payment calculation.

The 2023 version of the Plains Cotton Growers Inc. Seed Cost Calculator is available for download on the PCG website at the bottom of the “Resources” page.

The PCG seed cost calculator is an interactive Microsoft Excel spreadsheet that allows producers to calculate an estimated cost per acre, for both seed and technology, based on published suggested retail prices.

Questions about the tool can be directed to Shawn Wade.